The Inauguration of the Hermanus Biodiversity Walk at Walker Bay aptly took place on International Biodiversity Day on Friday, 22 May 2015.

Guests were warmly welcomed by Chairman of the Cliff Path Management Group, David Beattie, who also provided a brief background of the project and the role players involved.

In her keynote address, Mayor Botha-Guthrie said, “We all have a role to play in preserving the biodiversity of this beautiful region. The partnerships that have been established between the various stakeholders, the Department of Environmental Affairs being the main sponsor, the Municipality and other enterprises are key to ensuring the success of this project and those of similar ilk in the future.”

Primarily, the aim of the project is to provide employment and training opportunities to local communities in the Overstrand to ensure that previously unskilled labour would ultimately have a better chance of becoming more employable.

Other allocations of the GMC award were apportioned to projects such as the installation of a Weigh Bridge at the Transfer Station in Hermanus, alien cleaning, fire breaks, upgrades of parks and amenities and general clean ups.

The Mayor also pointed out that a parallel project to the Hermanus Biodiversity Walk would be the Champaign Mile VoiceMap walk which would be launched in due course.  To this end the Mayor stated, “This will give greater impetus to the commitment of all involved to the preservation and upliftment of our coastline.  In so doing we can ensure that we, as well as future generations, will have the pleasure and continued enjoyment of all of its splendour.” 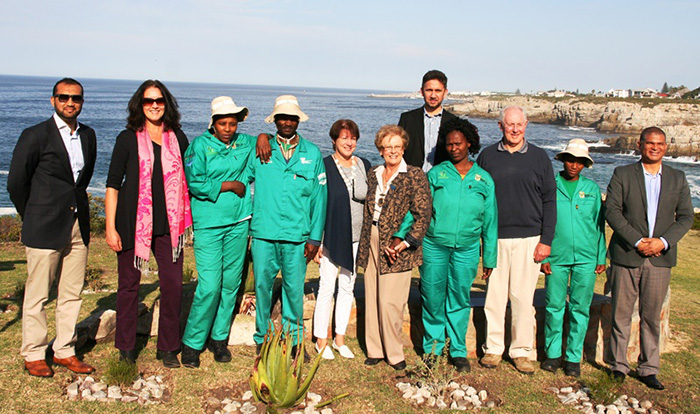