To this end, the crowd was regaled with a variety of poems, fables and stories performed by local poets and stalwarts.  William Prince’s “’n Stukkie Brood” had everyone captivated with its poignant message of sharing and inclusivity.  As, too, did the tale that Hawston Primary School teacher, “Juffrou Gladys” delivered about the passing of an old resident, who at the time of his wake was found to be sitting as straight as a rod, rather than laying in a state of repose as is to be expected of a corpse.

Before introducing the Minister to the audience, Overstrand’s Mayor Botha-Guthrie took some time to emphasise the significance of the ceremony taking place in Hawston, more so due to the number of awards the library, in particular, has garnered in recent times. Amongst these, the “Best Public Library: Youth Services” award that Hawston Library received at the Department’s 2014/2015 Cultural Awards ceremony earlier this year, stood out as a point of pride. “We are especially mindful of the importance of improving and developing our libraries as this invaluable service and reference station plays a meaningful role in the holistic development of our children, as well as the intellectual stimulation of our communities in general,” said the Mayor. 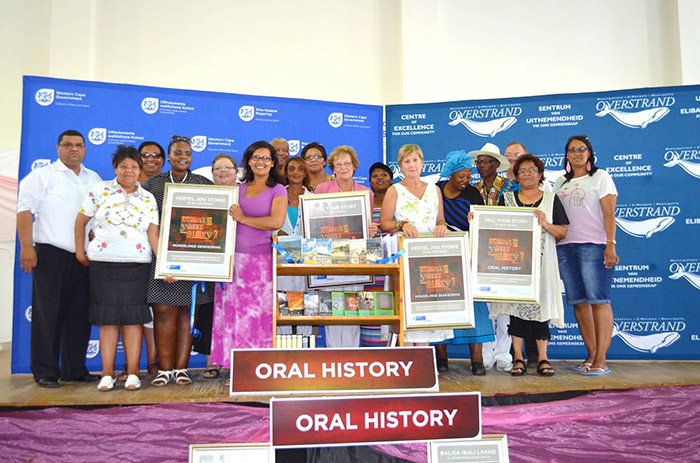 “As you’ve heard earlier, there is a wealth of artefacts and historical mementos that are currently being stored in “aunty Doris’s” old house.  We sincerely hope that local businesses and the relevant government agencies will come on board to assist us in realising the dream of establishing a ‘Hawston Fishing Community Museum’ for the safekeeping of these priceless treasures,” added the Mayor.

In her keynote address, Minister Marais appealed to all communities within the boundaries of the Western Cape to share their stories at local participating libraries that have been engaged for this purpose. “While promoting social inclusion through sharing our stories, we can also ensure that personal histories and experiences are kept alive in communities, and within government, so that future generations can know and celebrate their heritage,” stated Marais. “Besides, where else will we get such wonderful material for camp fire stories like the one we heard before about that ghost sitting up at his wake,” quipped the Minister.

The event concluded with the Minister and Mayor handing out specially crafted, framed “What’s your story” posters to key role players and drivers of the Hawston segment of the project, in recognition of the noteworthy contributions and efforts made by the municipal officials and community members concerned.