Deputy Minister of Justice and Constitutional Development, Mr John Jeffery was pictured delivering a keynote address to a rapt audience at a recent ceremony held at the Overstrand Municipality to mark the official opening of the Hermanus Additional Court.

Wednesday, 16 March 2016:  Since hearing its first municipal case in September last year, the newly established Hermanus Additional Court is now fully operational and is fast gaining recognition and traction for being an effective and efficient operation capable of handling the many cases brought before it on matters such as traffic violations, municipal by-laws and building code infringements, to name but a few.

Stats have shown that up to the end of February 2016, more than 2500 municipal cases have been heard at the respective Hermanus Additional Court, and on a circuit basis in Caledon.

In his keynote speech at the official opening ceremony, Justice and Constitutional Development Deputy Minister, Mr John Jeffery congratulated the Overstrand Municipality for delivering the state-of-the-art building ahead of schedule and at a fraction of the original estimated cost.  Jeffery also stated, “This is an excellent example of what can be achieved by fostering a co-operative relationship between various spheres of government in the attempt to deliver an effective justice system that is competent of servicing the legal and judicial needs of the public.” 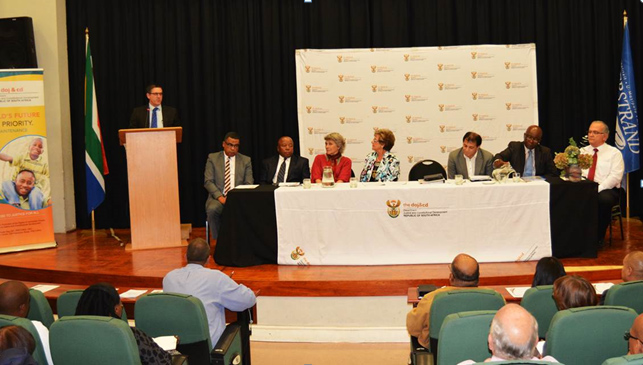 Whilst successful prosecutions and payments from subsequent fines or penalties instituted by the Court will garner the Municipality a steady stream of revenue, there is also great value to be had from its ability to educate the community in respect of legislation and the compliance thereof.  The added benefit is that it will also speed up municipal court procedures, as well as lower the backlog at the main magistrate courts of the region.

“We are exceptionally proud to be a part of this initiative and the impact it has had on the overall wellbeing of our people. Heightened public awareness and a positive change in behaviour, where a healthy respect for the law is upheld, is the desired end-result”, said Overstrand Executive Mayor, Nicolette Botha-Guthrie, on addressing the audience.

The event concluded with the Mayor and municipal officials providing the Deputy Minister and his entourage with an inspected tour of the Hermanus Additional Court and its service offering.