The blustering gale-force wind on Thursday, 7 April 2016 did little to dampen the joyful spirits of young Jack Kastner and his party when they met with Overstrand Mayor Nicolette Botha-Guthrie to receive an allocation to the Butterfly Centre in Stanford, where he is a learner at the special needs educational facility.

The Butterfly Centre is one of a number of recipients to benefit from the proceeds raised during the Seartec sponsored Overstrand Golf Day that was held at the Arabella Wine Estate and Country Club in November last year.

Well known ex Springbok rugby Captain Bob Skinstad, a key member of the SuperSport broadcast team where he delivers commentary on both local and international premier rugby events, coincidentally serves as an Executive Director of Marketing and New Business at Seartec.  Moreover he is also the Tourism Ambassador of the Overstrand.

The Butterfly Foundation is a charity organisation established in 2013 by Jami Yeats-Kastner in honour of her then 18-month son, Sam, who tragically passed away in February that year. Yeats-Kastner’s motivation was borne from the need to ensure her son’s life, albeit brief, continued to have meaning, whilst in turn leaving an everlasting impact on the world.

She, and husband Peter, have fortunately been blessed with two more boys. Their youngest, Alex, a typical 6-year old boy who enjoys mucking around outdoors, is thriving at their local village school in Stanford.

However, Jack aged 8, has special needs. For a while the delightful lad attended a mainstream school but it soon became evident that a different learning vehicle was needed that would cater specifically to the scholastic needs of kids with learning impairments like Jack’s.

After realising that there were very few of these facilities in the Overstrand, and exhausted from the constant treks to Cape Town in search thereof, Jami initiated a fundraising campaign that subsequently culminated in the Butterfly Centre being born on 20 July 2015 – the day that Sam Kastner would have celebrated his fourth birthday.

On addressing the group, the Mayor said that she was pleased that Alissa Coetzee, a Miss Teen Commonwealth SA finalist, had elected to bring the efforts of the Butterfly Centre to her attention. 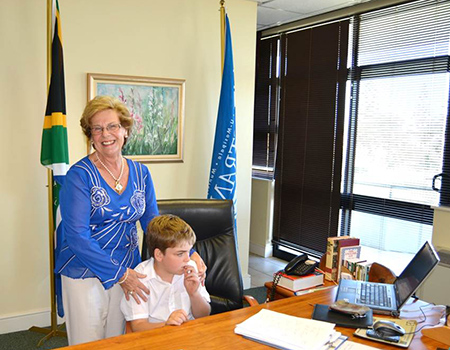 Through the Commonwealth Pageants, a worthy platform is created for young women to become charity and culture ambassadors within South Africa and the broader international stage. In this instance, Coetzee chose the Butterfly Centre as her charity of focus as she believes strongly that the work they do is making a notable difference in the holistic development of the young charges in their care, and also offers much-needed relief and guidance for the families concerned.

To that end, Botha-Guthrie stated, “Alissa, you’re an inspiration and a role model to your peers.  It is encouraging to see one so young extending herself to her community in such an astute, caring way. You may not realise it, but by doing this you are playing a vital role in drawing a spotlight on the many challenges this specialised educational realm faces. I wish you well at the Miss Teen grand finale in July and I look forward to you bringing the crown home to the Overstrand.”

Anyone wanting to lend assistance or make a donation to the Butterfly Centre can contact Jami Yeats-Kastner either on her cell number 071 751 9621, or alternatively on email address This email address is being protected from spambots. You need JavaScript enabled to view it.

More information on the Butterfly Foundation and Butterfly Centre can also be found on the web portal www.butterflyfoundation.co.za.

Furthermore, those wanting to read up on the Golf Challenge’s main sponsor, Seartec, may do so on www.seartec.co.za.