Overstrand Mayor Hosts Launch of Fynarts Wine ahead of Festival

Thursday, 7 April 2016: Nicolette Botha-Guthrie, Executive Mayor of the Overstrand, was delighted to act as host at the official launch of the FynArts Wine which resulted from a collaboration between Benguela Cove Wine Estate and Wine Village Hermanus that culminated in the production of 1000 bottles of red and white wine respectively.

The limited supply of Benguela Cove Shiraz 2012 and Sauvignon Blanc 2014 were especially labelled to raise money for the Hermanus FynArts Festival’s Development Fund.

The objective of the Fund is to broaden the exposure and promotion of the arts to include those who are not able to take part in the Festival due to socio-economic reasons, and to contribute to the promotion and skills development in the sector which could lead to possible job creation in the Overstrand.

Louis Jansen van Vuuren, the 2016 Hermanus FynArts Festival Artist was commissioned to create the label for the inauguration FynArts wine.  In celebrating a French Connection, the thread running through this year’s festival, the design is based on 18th century French Aubusson tapestry cartoons.

Festival Director, Mary Faure said, “This venture would not have been possible without the support of Benguela Cove, Wine Village and our FynArts 2016 Festival Artist. We are honoured that Louis Jansen van Vuuren painted and signed these beautiful labels, and are very grateful for his generosity, enthusiasm and support.  In so doing, FynArts has been afforded the opportunity to present the inaugural FynArts Wine to be sold in aid of the FynArts Development Fund.  We hope this become a FynArts tradition.” 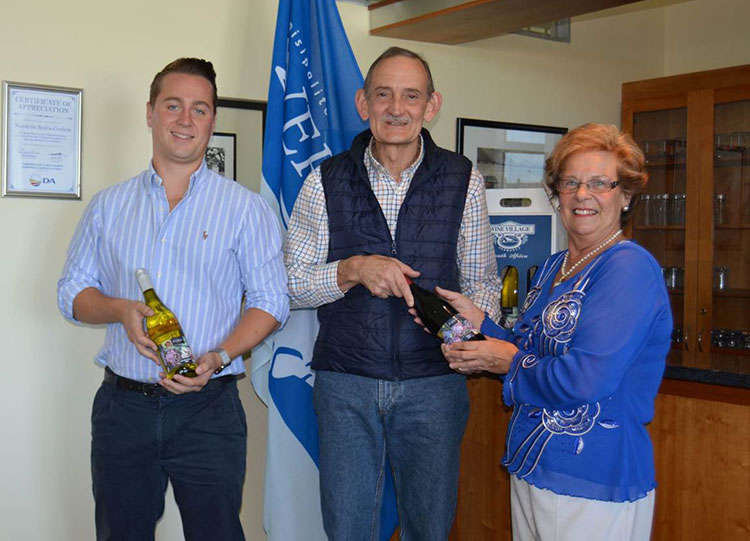 Faure further pointed out that the original paintings of the two labels will form party of Louis’ exhibition.

The specially-priced FynArts Wine is now available to the public from the distributor, Wine Village, as well as other licensed outlets.  Order forms are obtainable at Hermanus Tourism.  During the event, 10 – 19 June, order forms can also be found at various festival venues.

At the FynArts Wine launch event on Thursday, 7 April, Overstrand Mayor Nicolette Botha-Guthrie exclaimed, “I applaud partnership efforts of this nature as it ultimately assists us with the development and improved existence of the community and environment. In the same instance, a showcase like the Hermanus FynArts Festival provides an ideal opportunity for the spotlight to shine favourably on the Overstrand’s art and cultural capabilities.”