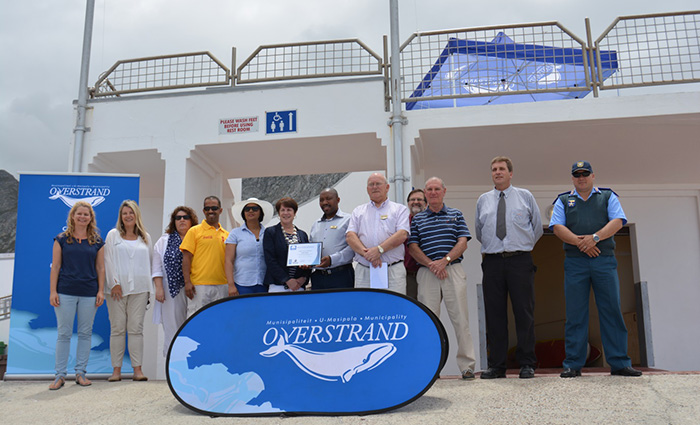 Overstrand Deputy Mayor, Ald Dudley Coetzee (centre) along with fellow councillors, protection services personnel and municipal officials , as well as various other stakeholders were recently pictured at Grotto Beach in Hermanus at an official ceremony to mark the 2016 Blue Flag campaign.

The co-ordinated ceremonial raising of the Blue, South African Flag and Overstrand flags that followed added a colourful component and drew collective gasps of appreciation from the audience.

Blue Flag is an international annual award given to beaches that meet a standard of excellence in the areas of safety, amenities, cleanliness, environmental information and environmental management.

In South Africa, the Blue Flag programme is managed by WESSA (the Wildlife and Environment Society of South Africa) and participating local authorities under the Department of Environmental Affairs’ Coastcare initiative.  The strict criteria of the programme are set by the international coordinators of the Blue Flag campaign in Europe, the FEE (Foundation for Environmental Education).  South Africa was the first country outside Europe to be granted Blue Flag accreditation for its beaches.