Since March 2019, more than 200 turtle hatchlings have been taken to the turtle rehabilitation centre at the Two Oceans Aquarium in Cape Town, after being rescued by vigilant members of the public.

The rehabilitation centre has been able to save most of them, but sadly, not all of the hatchlings survived.

Vital information about the species is gathered during the rescue and rehabilitation process, along with further insight into the ingestion of small pieces of plastic, including balloons.

Sea turtles are at special risk because balloons are mistaken for their favourite food (jellyfish) when floating in the water. Not able to digest the balloon, it will clog the turtle’s stomach and the animal will eventually die of starvation.

Releasing balloons into the air is extremely harmful to the environment, especially animals.

So let’s change our habits:

• say no to single-use plastic bags, beverage bottles, food wrappers and straws - and make sure you bin your cigarette butts.

Why are they washing up in such large numbers?

According to Two Oceans Aquarium, there is no one definite reason as to why the turtles are washing ashore but rather a number of them.

“Unfortunately, the reality of the situation is that in most years thousands of turtle hatchlings perish on the South African coast – in fact, it is estimated that fewer than one or two in a thousand survive to adulthood, and that is not even accounting for manmade hazards like poaching, ghost fishing nets or plastic pollution,” it says.

Loggerhead turtles hatch in the northern parts of KwaZulu-Natal and swim south until they reach the Agulhas current. In many cases, hatchlings are pushed from the Agulhas current into the cold water of the Atlantic. Unable to survive in the colder waters, these hatchlings become gradually weaker, and this along with bad weather hinders their movement back to the warmer waters. In many cases, the small marine animals ingest plastic, become ill and die. The Agulhas current is supposed to carry these hatchlings east off the coast of the Western Cape and into the warmer Indian Ocean, where they would thrive.

“It is these weakened hatchlings that inevitably wash up on the Western Cape’s coast, and without human intervention, they have no chance of surviving. We have a responsibility to help these animals,” says the Two Oceans Aquarium. 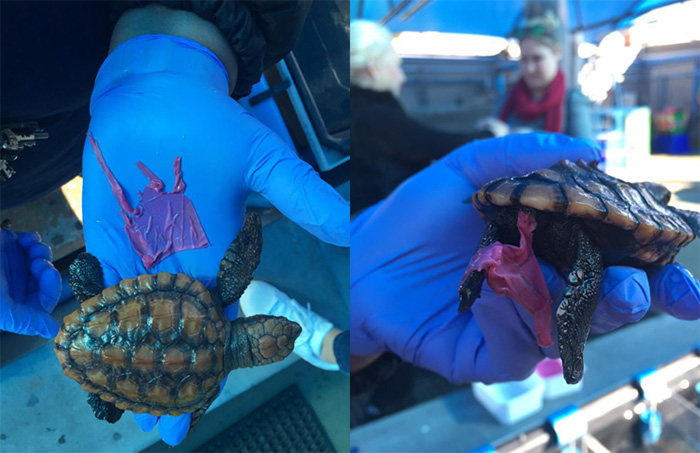 Drop off points for our area: