Overstrand’s Executive Mayor, Dudley Coetzee was joined by conservation managers, volunteers, academics and landowners to celebrate the opening of the 41st Fynbos Forum conference in Baardskeerdersbos from 5 – 8 August 2019.

During this annual event, experts in the Fynbos sector come together to share and exchange ideas, knowledge and progress in all the latest Fynbos connected fields.

The programme offered panel discussions, fieldtrips and a series of talks reflecting the conference theme (Eliminate barriers to conservation) – including topics on Insect Conservation in the Fynbos, Re-imagining conservation in the African Anthropocene and Renosterveld under siege: securing and managing one of the World’s most threatened ecosystem.

The following are excerpts from Mayor Dudley Coetzee’s speech at the official opening of the Fynbos Forum.

“Hosting such an auspicious delegation all set on preserving one of Overstrand's greatest assets is indeed an honour.

“Glancing at the conference programme, I am impressed by the range of the studies you are undertaking to help preserve even the most obscure species – be it a plant, an animal, or an insect.

“Undoubtedly, you are going to exchange a great deal of knowledge in the days to come, and on behalf of a local authority whose economy largely depends on being able to offer tourists from all over the world a first-hand experience of Fynbos as a Floristic Kingdom, I thank you for your efforts.

“The Cape floral kingdom is one of the richest areas in the world for plant biodiversity. The Western Cape is more botanically diverse than the richest tropical rainforest in South America and this includes the Amazon!  Of the 9,000 plant species found here, a majority are native fynbos vegetation, which covers the region's magnificent mountains, and lowland valleys and coastal plains.

“Along with the unique characteristics of the fynbos biome comes unique challenges. As many as 1700 plant species in the Cape Floristic Region are threatened to some degree, representing 75% of the plants in the South African Red Data Book.  Much of these are threatened by urban expansion or land use change, such as conversion to agriculture or housing developments.

“When you look across an expanse of fynbos, you may not at first be captivated by the collection of low scrubby plants and bushes but when you look a bit closer you will see the sheer diversity of these plentiful species found nowhere else in the world.

“This huge variety of animals and plants, and the places they live we call biodiversity. They provide us with essentials like food, drinking water, clean air, medicines, shelter and many forms of ecosystem services. Conserving this biodiversity ensures the continued production of clean water, an abundance of species to explore as medicinal products and diverse gene pools for crops and natural resources.

“The rich biodiversity of the Cape Floristic Region makes a substantial contribution to the regional economy, of the Western Cape. Harvesting of our marine resources, such as linefish, rock lobster, and bait species, is worth over R1 billion per year.

“The fynbos flower industry alone generates nearly R150 million each year from exports and local sales. About R12 million's worth of buchu is exported each year, their oils being used to make food flavourants and cosmetic fragrances.

“Tourism is also dependent on natural resources - with an estimated 24% of foreign visitors attracted by the Western Cape's scenic beauty. Natural resource-based tourism is one of the greatest income generators in the region, which is renowned for its beauty and floral diversity as well as other nature activities such as whale watching shark diving and angling.

“A study done by Turpie, Heydenrych and Lambert on the Economic value of terrestrial and marine biodiversity in the Cape Floristic Region, states that the value of the region's rich biodiversity is estimated at a total economic value of at least R10 billion per year.  However, invasion of aliens, transformation of natural vegetation and overexploitation of resources threaten the sustainability of this value.

“Invasive alien plants, which are the greatest threat to floral diversity, already intercept significant water supplies. However, clearing is costly.

“It is also these invasive alien plant species that change the natural fire characteristics of our Fynbos Biome by changing the landscape and soil profile which leads to higher fuel loads, hotter, intense and more regular fires than what these systems are used to.

“This brings me to the 2018/19 fire season that has become known as one of the most overwhelming in the history of the Overberg. While more than 30 wildfires burned during the season, 20 of these were very damaging and very costly.
“The sound and smell of a fire brings different images to different people.  Surprisingly fire is one of our greatest tools for biodiversity conservation, but as we as a community experienced it, it felt like one of the most destructive forces we have ever encountered.

“The Betty’s Bay fire, which started on New Year’s Day became one of the most devastating fires in the history of the Overberg. The fire started due to a flare shot off early on the 1st of January 2019. The fire caused significant ecological and economic loss. On 11 January, the fire entered the town of Betty’s Bay, and destroyed 31 properties, and damaged 28 homes. The fire burned two thirds of the Kogelberg Nature Reserve of 12,800 hectares.

“The Hermanus fire came about when the Karwyderskraal fire stormed into the Hemel-en-Aarde Valley and out the other side into the Fernkloof Nature Reserve. No structures were lost in Hermanus, but 1,300 hectares were destroyed.

“On the same Friday, 11 January, a third fire in Franskraal started due to civil unrest. Parts of the town of Franskraal were evacuated, with two structures lost in town, as well as a caravan park. Around 1,000 hectares were destroyed.

“The Overstrand Municipality has consequently:

“All of these plans however mean nothing without the expertise and funding to implement.  We know this and will be working tirelessly with our landowners, environmental partners, District and Province to achieve a greater fire preparedness for the future.

“We will continue to work with our community to contain the impacts of Invasive Alien Plants together with natural veld age management and associated activities to ensure that future fires will not again have a devastating impact on our community and environment.

“One question that I would like to leave with you, is it not time that the activities of man should also be introduced as part of the equation in our efforts to conserve our floral kingdom.

“On that note, I am sure you will have many fruitful discussions at this, the 41st Fynbos Forum and gain new insights and knowledge.  I look forward to receiving some positive suggestions on how the Overstrand Local Government can entrench the principles of conservation in all those who are fortunate enough to call this beautiful area their home. “ 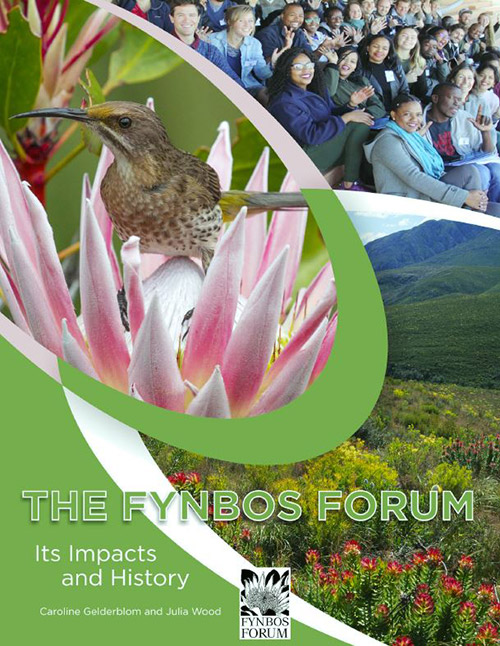