On Sunday, 10 November 2019,  during the annual Remembrance Day Parade held at the Cenotaph in the Old Harbour Hermanus, war veterans, friends and family paid tribute to members of our armed forces who have died in the line of duty.

As is customary, Regiment Westelike Provincie, holder of the Freedom of the Overstrand, lent military colour to this occasion. The Old Bill of the Seagull Shellhole, the local unit of the Memorable Order of the Tin Hats (MOTH’s) arranged the ceremony.

Having laid a wreath on behalf of the Overstrand community, Mayor Dudley Coetzee said it is an honour to share this solemn occasion with everyone present to commemorate those who sacrificed all for the greater good of mankind.

The Mayor thanked Lieutenant-Colonel Harvey Saayman, former Commanding Officer of the Western Cape Regiment, who took it upon himself to ensure that residents of Overstrand observe the tradition of paying homage to our fallen heroes annually on Armistice Day.

“Sir, I salute you, and it is my fervent wish that the memory of the men and women you, as a founding member of the MOTH's Seagull Shellhole so valiantly represent, will live in our memories forever”.

On addressing those present, Peter Dickens, Adjudant of MOTH Seagull Shellhole, said Remembrance Day, also known as Poppy Day, was first observed in 1919 throughout the British Commonwealth. It was originally called Armistice Day to commemmorate the armistice agreement that ended the First World War on Monday 11 November 1918 at 11:00. at the eleventh hour of the eleventh day of the eleventh month.

“Few people realise the significance Hermanus has played in military history and where it features on Remembrance Sunday.  Here are just a few interesting facts on the role the Western Cape and Hermanus have played: 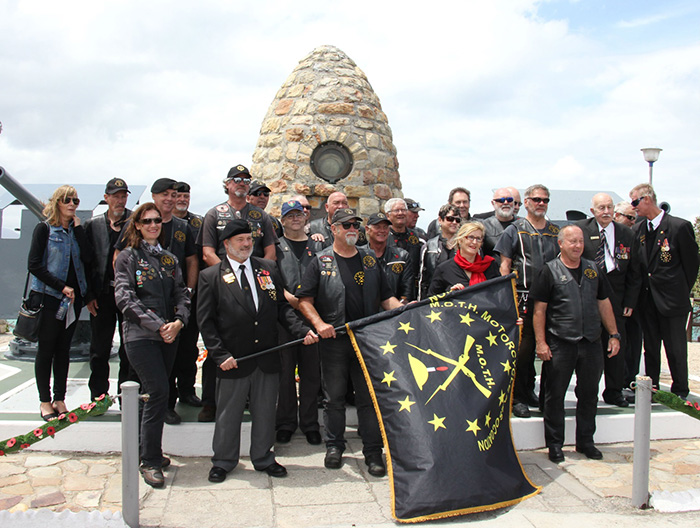 The 2 minutes of silence in remembrance observed worldwide, originated in South Africa …. it all started in Cape Town.

During World War 1, Mr J.A. Eagar, a Cape Town businessman, suggested that the congregation of the church he attended observe a special silent pause to remember those names on the South African casualty list read out every day at his Church. Fate would have it that this church in Cape Town was also attended by Sir Percy Fitzpatrick, the famous South African author of ‘Jock of the Bushveld ’.

The idea took hold in the Church and Mr RR Brydon, a Cape Town City Councillor, suggested in a letter to the Cape Times that this period of silence to remember the sacrifices being made on battlefields, be initiated to reach a broader audience. Mr Brydon’s son, Maj Walter Brydon, three times wounded and once gassed, was killed on 12 April 1918.

Based on Mr Brydon’s letter in May 1918, the Mayor of Cape Town, Councillor H Hands (later Sir Harry Hands) decided that the moment of silence to remember all who had fallen, would become a city-wide activity. It would follow the firing of the Noon Gun, the most audible signal with which to co-ordinate the event across the city of Cape Town.

The boom of the gun signalling the midday pause of two minutes was heard for the first time on 14 May 1918.  It became the signal for all activity in the Mother City to come to a halt. Everything came to a standstill while everyone bowed their heads in silent prayer for those in the trenches in Flanders.  This tradition then continued for the duration of World War 1;  every day at  noon, the city of Cape Town would come to attention and stand in silence for two minutes.
Sir Percy Fitzpatrick was so moved by this simple act originated in his Church that at the end of World War 1, he wrote to Lord Milner and described the silence that fell on the city of Cape Town during this daily ritual. Taking into consideration that the guns of war finally fell silent at 11:00 on the 11th day of the 11th month (November), Sir Percy felt that the idea of observing the two-minute silence at that time and on that date, would give the Act of Homage great impact, and proposed that this became an official part of the annual service on Armistice Day.

Sir Percy’s letter was received by Lord Milner on November 4, 1919, reviewed and accepted by the War Cabinet on November 5, and was immediately approved by King George V, then King of the United Kingdom. Shortly afterwards, on the 7th November 1919, it was proclaimed by decree.

“Tuesday next, November 11, is the first anniversary of the Armistice, which stayed the worldwide carnage of the four preceding years and the victory of Right and Freedom. I believe that my people in every part of the Empire fervently wish to perpetuate the meaning of the Great Deliverance, and of those who laid down their lives to achieve it.

To afford an opportunity for the universal expression of their feeling, it is my desire and hope that at the hour when the Armistice comes into force - the eleventh hour of the eleventh day of the eleventh month - there may, for a brief space of two minutes, be a complete suspension of all our normal activities … so that in perfect stillness, the thoughts of everyone may be concentrated on reverent remembrance of the glorious dead.”

In thanks for this now universal Act of Remembrance suggestion of the two minute silence on Armistice Day, Lord Stamfordham, the King’s Private Secretary wrote to Sir Percy:

The King, who learns that you are shortly to leave for South Africa, desires me to assure you that he ever gratefully remembers that the idea of the Two Minute Pause on Armistice Day was due to your initiation, a suggestion readily adopted and carried out with heartfelt sympathy throughout the Empire.

The two minute silence ritual, calling Cape Town to attention, continued throughout World War 2, and the entire city came to a standstill every single day.

As South Africans we have the honour of giving the world this most significant Act of Remembrance and it is something we should all be deeply proud of.

Roger Bushell is remembered on the Cenotaph in Hermanus where his family lived and contributed so much to the town.  (The local High School still has the trophy for the highest achieving learner named after him.)

Squadron Leader Roger Joyce Bushell RAF – AAF (30 August 1910 – 29 March 1944) was an Auxiliary Air Force pilot who organised and led the famous ‘Great Escape’ from the German prisoner of war camp, and also victim of the Stalag Luft III murders when participants in the famous escape were caught and executed by the German Gestapo.

In Spring 1943, Roger Bushell, a Spitfire pilot captured during the war, organised the mass escape of officers from the German Luftwaffe POW camp.  Bushell famously declared to the Allied officers preparing to escape:

“Everyone here in this room is living on borrowed time. By rights, we should all be dead! The only reason that God allowed us this extra ration of life is so we can make life hell for the Hun… Three bloody deep, bloody long tunnels will be dug – Tom, Dick and Harry. One will succeed!"

In all, 76 of the 200 officers lined up to escape managed to get away from the tunnels.  However 73 of them were later caught. 50 of the 76 escapees were murdered on the personal orders of Adolf Hitler, including Roger Bushell and 2 other South Africans.

This escape was used as the basis for the film The Great Escape. The character played by Richard Attenborough, Roger Bartlett, was modelled on Roger Bushell. But unlike the highly fictionalised movie the real man was not a plummy British officer;   but he was in fact a South African.

This year is the 75th Anniversary of The Great Escape and Roger’s execution by the Gestapo. The plaque in honour of Roger Bushell is on the base of the local Cenotaph and it is his only tangible memorial recognition in the world, other than his headstone in Poland.

Hermanus even has its own links to a Victoria Cross.  Now who knew that?  Even more significant is that the cliffs over the Old Harbour is where this remarkable South African Victoria Cross winner was laid to rest.

“For most conspicuous bravery during operations. Lance Corporal Hewitt attacked a pill-box with his section and tried to rush the doorway. The enemy garrison, however, proved very stubborn, and in the attempt this non-commissioned officer received a severe wound. Nevertheless, he proceeded to the loophole of the pill-box where, in his attempts to put a bomb into it, he was again wounded in the arm. Undeterred, however, he eventually managed to get a bomb inside, which caused the occupants to dislodge, and they were successfully and speedily dealt with by the remainder of section.”

After the war William lived to a ripe old age and died in 1966. He was cremated and his ashes were returned to South Africa where they were scattered at sea off the beautiful Hermanus Cliffs at Gearings Point on 2 January 1974.

However, he is not remembered on the Cenotaph here nor on Gearing’s point, and it’s something that we as residents and officials of Hermanus should consider. This location is the resting place for someone who in all reality was one of the bravest South Africans.

Hermanus also has a connection with General Jan Smuts, besides him been   being the Colonel in Chief of Regiment Westelike Provinsie, now re-named The General Jan Smuts Regiment, present today and having the freedom of Hermanus. Miss A M (Bebas) Smuts, sister of General Jan Smuts, retired to Hermanus and served as Mayor of Hermanus during the Second World War from 1941 to 1946.  During the war Hermanus was a radar station and actively involved in the war effort.  Another connection Hermanus has to South Africa’s rich military history.

As veterans and uniformed serving personnel alike, we are proud to honour the wartime sacrifices Hermanus has made, respect its proud military history, a memory to the fallen and a history that should not be forgotten.
Almost without fail, the notes of a single bugle sounding the Last Post, the colours slowly being lowered to half mast, the two minute silence maintained in homage and the solemn laying of numerous wreaths brought a tear to the eye of many an onlooker participating in this sacred ritual. 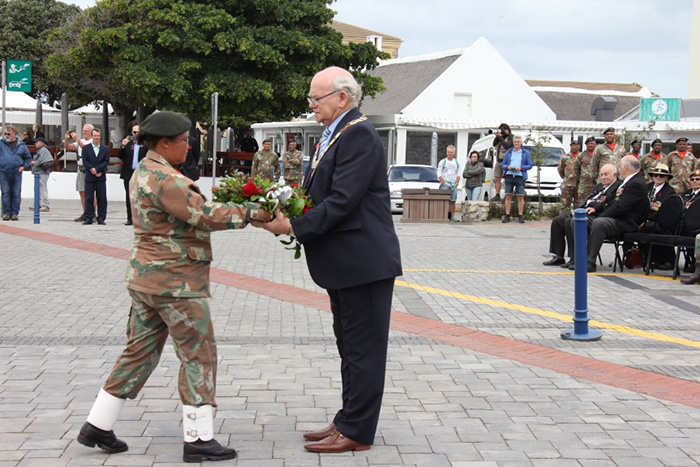 In his keynote speech, Mayor Coetzee said he further hopes that we will take this solemn moment where we pay homage to our fallen heroes to not only think back on the trials and tribulations of the past, but to also reflect on how we are going to face the challenges that lie ahead.

Surely it is our duty to instill valour in those who follow in our footsteps. But, first and foremost, it is our duty to teach our children, and our fellowman, that there are far better ways to resolve conflict than to take up arms.

Nowadays, the ‘trenches’ in which modern-day ‘wars’ are fought, are pretty much the streets and alleys of our cities and towns.

It is sad that intolerance, senseless acts of violence towards women and children, gangsterism, organised crime and a general disrespect for law and order have created a ‘minefield’ our citizens must navigate daily.

“In short, fighting this war calls for a different arsenal:  Instead of going out with guns-a-blazing, we need to make it our mission to actively entrench the values that underpin a morally sound, law-abiding society.”

The Mayor ended by saying: “Let’s unite against criminal oppression, stand up against immorality and lawlessness, and entrench the principles of honour, fairness, respect for human life and love of our neighbours where and whenever we can.”