The remaining units and serviced sites of this R77.9 million Integrated Residential Development Project (IRDP) in Hawston, are expected to be finished by April 2020.

The new development is situated east of the R43 in Hawston and will be named Hawston Heights. It comprises 489 sites that include 107 residential sites for the affordable housing market in terms of the Finance Linked Individual Subsidy Programme (FLISP), 378 residential top structure sites for the Breaking New Ground (BNG), two business sites, two community zoned sites and nine open public spaces, roads and a storm water retention pond.

Of the 378 40m² in size BNG houses that will be built, 19 45m² are being built to accommodate people with disabilities.

These houses include a ramp leading to the front of the house, grab rails in the bathroom and sliding doors to the bathroom, as well as lowered light switches to make it accessible to wheelchair-bound residents.

On addressing those present, Minister Simmers reminded residents who are considering renting out their homes or trying to sell them, that according to the contract, owners are not allowed to sell a house handed over by the Government for eight years. They may also not rent it out or use it as a spaza shop or business premises.

He encouraged families to participate in community development and to take responsibility for their security by forming a neighbourhood watch.  “You have been given an opportunity, don’t misuse it,” the Minister said.

In keeping with the above sentiment, Ward 8 Councillor and Deputy Mayor Elnora Gillion asked residents to take care of their houses and plant grass, trees and flowers. “We want a place where our children can go play safely and it is important for young and old alike to exercise and socialise,” she added.

In closing Cllr Arnie Africa thanked Frankie Frans and his team at the Housing Department for their commitment and logistical arrangements during and before handovers. 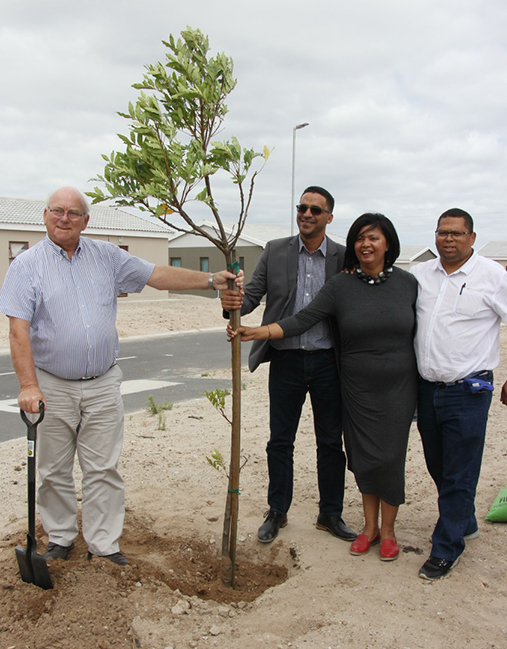