The stylized Mandela Mosaic Mural was officially unveiled by the Executive Mayor Nicolette Botha-Guthrie on Mandela day, 18 July 2014, in an event attended by councillors, Junior Councillors and members of the public.

This mosaic mural initiative was conceptualised last year when the late Mr Nelson Mandela’s health deteriorated.  Mayor decided that, in honour of the late former president of South Africa, his face will be portrayed in a mosaic mural in the garden at the municipal main building in Hermanus.

She wanted to honour the legacy of Madiba for the benefit of the whole of the Overstrand community.  She wanted to establish something tangible for the enjoyment of the public and visitors to the area.

Raphael and Phambili from the company Big Mosaic Works in Zwelihle were commissioned for this job and they worked long hours from April to the end of June 2014 to complete the mural.   It took three weeks to erect the mural in the garden of the municipality.

The Junior Town Council was part of the project and an opportunity was offered to them to lay a few tiles together with the Mayor. 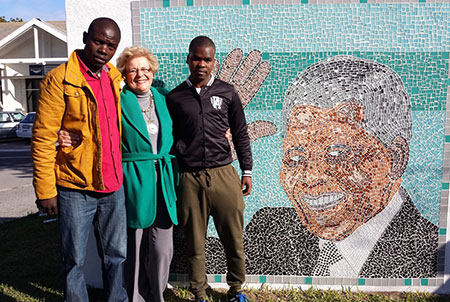 The following projects also formed part of the Mandela Day Celebrations in the municipality:
Knitted “Mother Teresa” sets for premature babies, received from a member of the community, were distributed to the Provincial Hospital.

Gloves and scarves were handed out to learners at three pre-primary schools in the previously disadvantaged areas.  This was an Overstrand community project where the Mayor bought wool from her private Mayoral Fund and senior citizens and members of the public were involved to knit these for distribution.

Knitted jerseys donated by members of the public, will be distributed to children at various crèches.
“Wonder bags” were distributed to households in Westdene, Mt Pleasant, Over Hills, Mooi Uitsig, Zwelihle and Hawston.  These are donated to poor families to assist them in coping with electricity costs. 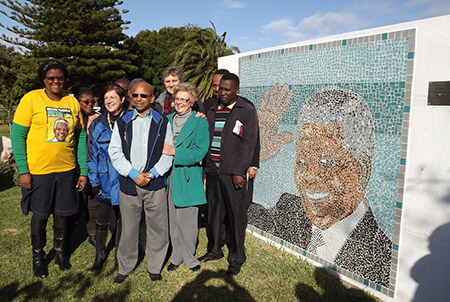 In Kleinmond on Thursday, 10 July the mayor and councilor Krige handed out ‘wonderbags’ to 8 different (groups or individuals) in various parts of ward 10 as part of the overall Mandela Day effort. This took more than 67 minutes all done for a good course. A coastal path cleaning project also took place in Palmiet.

The mayor arranged with a private company to fix the roof of a crèche in Zwelihle as part of their Mandela Day contribution.   This is not only going to end on Mandela Day, on Monday 21 July, the mayor and councilor Krige will be handing out home-knitted gloves and scarves to needy children at the Kleinmond Primary School in Proteadorp. This is scheduled to happen around 1pm.