There are renewed concerns about small quantities of plastic pellet particles, also known as nurdles, that have been found on Silver Sand Beach in Betty’s Bay this morning.

Hanglip-Kleinmond residents are being asked to find time to collect as many nurdles as possible‚ particularly from the high-water mark.

Two wheelie bins have been placed in the parking areas at Silver Sand Beach and Stony Point Penquin Colony in Betty's Bay as collection point.

Unfortunately these nurdles are hard to spot. They are very small and their colour often blends in with the sand or can be covered up by seaweed.

The pesky little critters are toxic, and never go away. Nurdles cannot be digested by animals who often mistake them for food -

with a dire end result of digestive blockages, starvation and eventual death. The worn-down micro-fragments block filter feeders and clog respiratory gills. They look just like fish eggs, which impacts birds as well as marine animals.

Please be on the lookout

Overstrand Municipality has asked members of the public to be on the lookout for any nurdles that may be found along our coastline and to report sightings to help track the movements of these potentially lethal little beads.

Alternatively contact South African Shark Conservancy (SASC) on 028 312 3029 or Dyer Island Conservation Trust on 082 907 5607 or African Penguin and Seabird Sanctuary (APSS) on 072 598 7117 and remember to mention exactly where they were found/spotted.

Below is a suggested equipment list and some examples of their use:

-    OLD JAM JAR: to keep you nurdle finds in and spread the word of plastic pellet pollution
-    SIEVE: to separate nurdles from the sand
-    BUCKET: to collect nurdle finds and other marine debris. Many (though not all) nurdles and microplastic will float in water, so a  quick way to separate them from sand  can be to simply put the collected  nurdles, sand and debris in a bucket of  water and scoop off the plastic  fragments from the top placing them

Please do not discard in Municipal waste bins, rather drop them off at Overstrand Fire Brigade in Mussel Street, Hermanus. 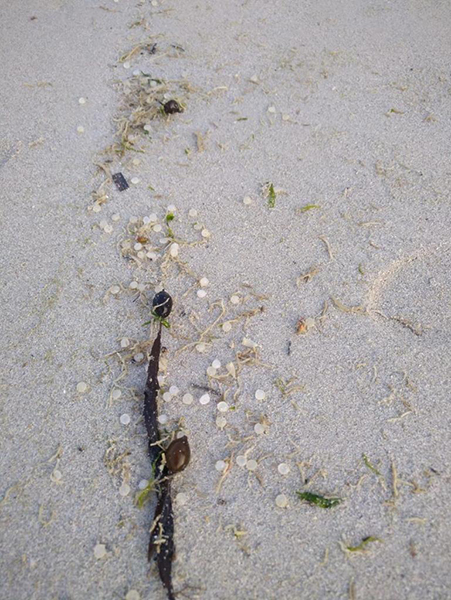