On the eleventh hour of the eleventh day in the eleventh month 2020, the Executive Mayor of Overstrand Municipality, Dudley Coetzee, took part in a special Remembrance hour at the Hermanus Cemetery to mark the armistice agreement that ended the First World War.

Many Hermanus residents came to pay their respects and to reflect on the sacrifices of those who have bravely served in wartime.

Members of the local Seagull Shellhole of the MOTH's and Hermanus resident Melanie Moore, who started beautifying the Hermanus cemetery a few years ago, arranged the special assembly for Remembrance Day.

Before the official programme started the branch committee and volunteers from Cllr Kari Brice’s Ward 3, planted vygies in their continued effort to beautify the cemetery. The red paper poppies that were cut out and put on the white crosses at the entrance of the cemetery gave a special touch to the day and it was good to see learners from the Generation School also doing their part to clean the cemetery.

In Flanders fields the poppies blow
Between the crosses, row on row,
That mark our place; and in the sky
The larks, still bravely singing, fly
Scarce heard amid the guns below.

Liezel Nel played the Last Post on her trumpet. It gave way to the two minute silence which was followed by André Willemse releasing his racing pigeons.

Lieutenant-Colonel Harvey Saayman, former commanding officer of the Western Cape Regiment, said in his address that Hermanus has a rich military history and that “we should be proud of the influence of South Africans during WW1 and WW2”.

Interesting to learn; the two minute of silence in remembrance observed worldwide, originated in Cape Town during WW1.

Few people know that during World War I, Hermanus had the highest level of volunteering per size of population in the British Empire and the War Memorial was erected near the Old Harbour to commemorate the 11 volunteers who never returned.

Lieutenant-Colonel Harvey paid tribute to the connection Hermanus had with General Jan Smuts and his sister, Bebas Smuts, who served as Mayor of Hermanus during the Second World War from 1941 to 1946.

Other war heroes included Roger Bushell (the Great Escape) whose grandparents and parents used to live in Hermanus. Hermanus High School has a trophy for the highest achieving learner named after him and South African Victoria Cross winner, William Henry Hewitt, whose ashes were scattered at sea off the cliffs at Gearing's Point.

Mayor Coetzee thanked all who were involved in arranging the event, especially the Regiment Westelike Provincie, holder of the Freedom of the Overstrand and the Old Bill of the Seagull Shellhole, the local unit of the Memorable Order of the Tin Hats (MOTH’s) who are always willing to organise the event.

He said it was a privilege to have war veterans Ms Priscilla Drewe and Rifleman Nigel Goldi in attendance. Priscilla was a Code Cracker for MR5 during the 2nd World War and was born in February 1926.

He continued by saying:

But there is also another picture that comes to mind: That of fields bedecked in poppies – symbolic of an earth drenched in the blood of fallen soldiers.

The sacrifice those soldiers made will live in our memory forever.

And it is precisely for that reason why I find it so fitting that Melanie and her committee came up with the idea to choose this very day to brighten up the Hermanus cemetery by planting vygies.

I applaud and thank you for the highly fitting and touching manner you chose to commemorate Remembrance Day 2020.

May God bless South Africa and keep us safe”. 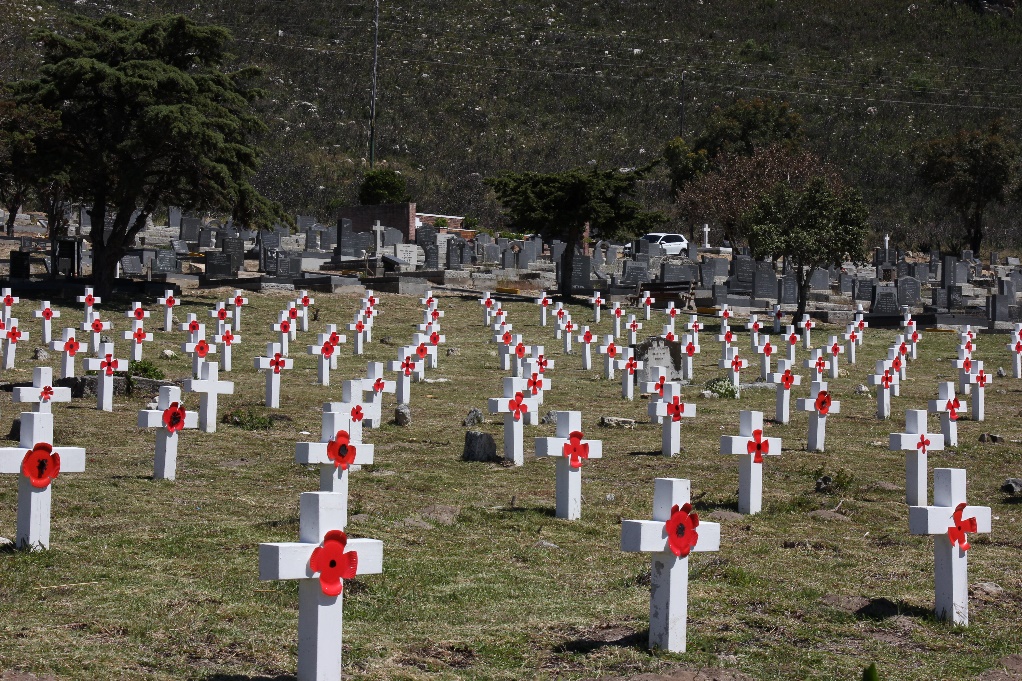