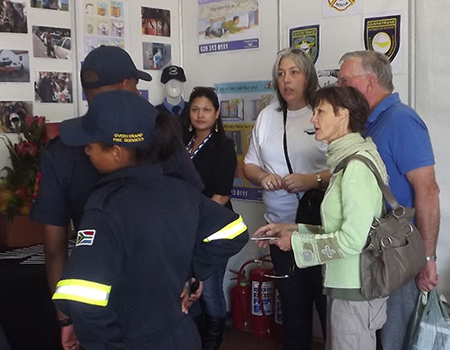 To coincide with the annual Whale Festival, Overstrand recently hosted its Municipal Showcase at Gearing’s Point from 3 to 6 October. This time round, partaking municipal departments went a little beyond merely putting up displays to showcase their services: Instead, the personnel who manned the stations daily actively engaged with visitors to answer their questions and to provide information on municipal services in visitors’ mother tongues.

Despite the weather not playing along initially, young and old attended the festival in droves. Around 150 walk-ins were welcomed to the Showcase daily, and most were impressed with the quality of the displays and the attending personnel’s courteous response to their questions. Around a hundred written comments were received and will be followed up with the respondents in question over the next couple of weeks.

The idea behind the exhibition is to bring municipal services closer to the people we serve and to showcase the municipality’ achievements as a centre of excellence. This year, Infrastructure & Planning, LED, Community Services, Management Services, Protection Services and finance directorates manned stalls. They were joined by representatives from all four administrations as well as the fire brigade.

Generally, feedback regarding the new format is positive, and the municipality and the participating directorates plan on building on the lessons learnt to put up an even more impressive show next year.