The Gansbaai-Stanford area is often without power for a number of days due to the poles and pylons being blown over - and in addition residents lost all ability to communicate by landline or cell phone.

The Municipality had previously addressed issues with Eskom in a letter dated 23 December 2019 after which a maintenance schedule was received in response from Eskom. 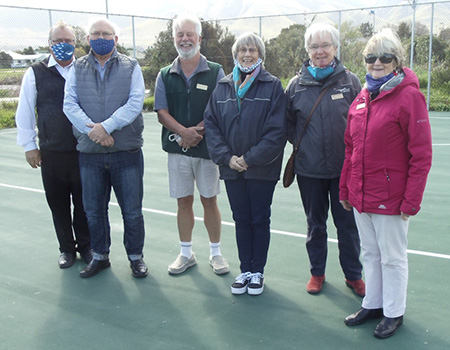 After several delays, the new dedicated netball court has been completed. The Stanford Netball Club team can now start training more often and they are now also in a position to host tournaments.

The new netball court is situated in Bezuidenhout Street, adjacent to the existing soccer field.

According to Rotarian Lana Coates, the Rotary Club of Stanford was finally able hand over the new court to the Overstrand Municipality on 13 August 2020.

This netball court was made possible through a partnership between the Rotary Clubs of Stanford and Knoxville (in particular Frank Rothermel and Kathryn Johnson) and a Global Grant from the Rotary Foundation.

Mayor Dudley Coetzee thanked the Rotary Club of Stanford for all they have done over the years for the resident of Stanford and wished netball coach Anchelle Damon well.

Hermanus Public Protection (HPP) patrols are coming to an end today, 14 August 2020 and will leave a ‘service gap’ until the Hermanus Special Rating Area (HSRA) is in place.
As has been undertaken by the Executive Mayor and until such time as the management body of the newly established HSRA has been registered as a non-profit company in terms of the Companies Act, Overstrand Law Enforcement Officers will assist with foot patrols in the CBD area, Cliff Paths and Hoy's Koppie on a daily basis from tomorrow morning, 15 August. Members of the Law Enforcement Task Team and Traffic Services will also assist during this period.

The foot patrollers will be visible in neon orange reflective bibs. Any suspicious activity can be reported to the 24 hour law enforcement number at 028 313 8996.

The public is once again urged to not just stop paying their accounts, but to contact the municipality in order to make arrangements to settle the arrears. In the absence of any formal arrangements, or if these arrangements are not honoured, debt collection processes will apply and customers who are in arrears with their municipal accounts and who have not made arrangements with the Municipality will thus have their supply of electricity, water and other municipal services, suspended, restricted or disconnected. Interest will be payable on all outstanding amounts.

Auxiliary on electricity purchases will also apply. In applying for a payment arrangement your information could assist the administration with assessing whether you possibly qualify for indigent support and if the application is successful, you could receive an indigent subsidy.

Digital Copies of the Overstrand Municipality By-law on Municipal Land Use Planning, Land Use Scheme and Overlay Zones can be obtained from the Municipal website at the following address: https://www.overstrand.gov.za/en/documents/town-planning/by-laws/overstrand-municipality-amendment-by-law-on-municipal-land-use-planning-2020