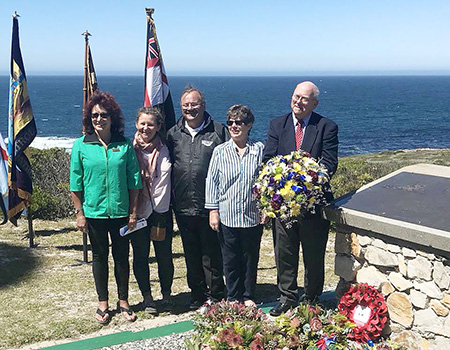 Victims of one of the worst maritime disasters of the 19th century have been remembered in a wreath-laying ceremony on Birkenhead Rock in Gansbaai, followed by a small remembrance ceremony at sea.

There to recount the events, as well as laying a wreath in memory of those who gave their lives, was Overstrand Municipality Acting Mayor, Dudley Coetzee.

In his speech the Mayor said:

“On this day, 26 February 1852, 166 years ago at 2 am the troopship HMS Birkenhead was wrecked less than 5 kms from these shores when it struck a rocky outcrop jutting out of the sea.  As the ship separated from the rock with a gaping hole in its side, water filled the forward section and more than 100 troops drowned in their sleeping quarters.

The current drought is extending its hold on Western Cape municipalities more and more.

The Groenberg Water Users’ Association has made this water available to the City from their irrigation allocation.

The Annual Report for Overstrand Municipality for the financial year 2016/17 was tabled at a special Council meeting on 24 January 2018.

The annual report is published yearly to provide all interested parties information on the Municipality’s service delivery and financial performance for the previous financial year, in this instance 2016/17.

The Annual Report showcases the Municipality’s performance over the past financial year, including its accomplishments and challenges. The report also highlights progress made by the Municipality in terms of service delivery, in order to benchmark new standards of performance and set new goals for improvement.

Regular inspections are carried out during the period that the beaches are operated as Blue Flag beaches and at least one visit is unannounced.

In South Africa, the Blue Flag programme is managed by WESSA (the Wildlife and Environment Society of South Africa).

Blue Flag status is awarded seasonally and municipalities must apply annually to renew the status of their beaches.

Water samples are taken at regular intervals and are tested by an independent laboratory.

The good co-operation and sense of responsibility demonstrated by the public since the implementation of water restrictions in Hermanus is commendable.

The Buffels River Dam, which supplies water to Rooi-Els, Pringle Bay, and Betty’s Bay, is still close to 100% full capacity, as is the Kraaibosch Dam at Gansbaai and the Pearly Beach Dam. The boreholes supplying Hermanus, Stanford, Baardskeerdersbos and Buffeljagsbaai have not been adversely affected by the drought at this stage.

The Overstrand Municipality continuously monitors the water situation in all its supply areas, and additional measures will be taken when deemed necessary.