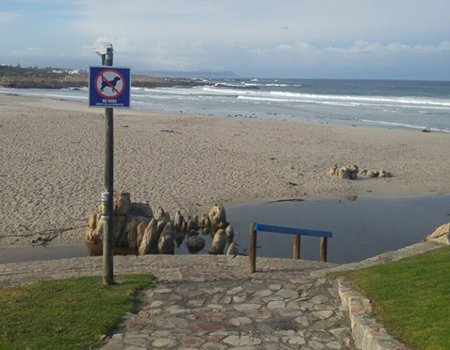 Outrage over ‘new sign’ that says no dogs on Onrus Beach

A newly erected ‘no dog on beach sign’ seen over the weekend at Onrus Beach, has angered dog walkers who have been using the facility for decades to exercise their pooches, and will be removed today.

This still applies: Dogs must be kept on a leash

While dogs will still be allowed to enjoy the beaches, their movements will be more restricted to comply with the municipality’s by-law on Dogs and Cats.

Section 6(2) and (3) of the above by-law are clear both in context and literal interpretation: “No person may or cause to allow any dog to be in a public place unless it is kept on a leash.” Note that public spaces include any beach, road, path, bridge, footpath or garden; and any other place under the control of the municipality. 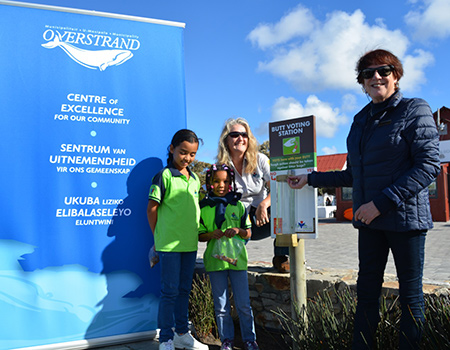 Following Dr Lee’s demonstration on the voting system, attendees were encouraged to place their butts in the ballot slot of their choice. With more people inclined to vote ‘Yes’ against tough action being taken against litter bugs, it’s anticipated that section would fill up a lot faster than the ‘No’ column. To that end, WCC’s General Manager,  Rob Fryer stated:  “Soon we’ll be installing a bigger  2m x 300ml transparent tube into which the ‘stompies’ from all the Butt Binns in the area will be placed.  The visual display of such a mass build-up of butts will further serve to create heightened awareness of the extent of the problem.”

“Discarded cigarette butts in the environment are a health hazard because they contain toxins which trickle out into the soil, ground water, rivers and sea rather quickly. When this is taken in by animals which are then eaten by other animals and humans, these toxins move along food chains until found in all parts of the food web. 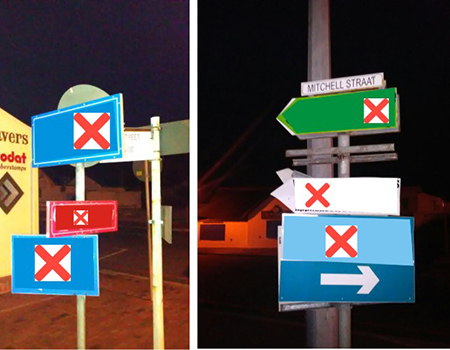 No one can deny the profound influence advertising has on a business; nor the importance of it.

“Unfortunately signage on certain street poles, including those on stop streets, as well as A-boards and illegal trailers that are parked along the roads and is causing an obstruction, can distract motorist while driving, therefore becoming a hazard and that is why there are by-laws about it,” Mayoral Committee Member for Protection Services, Cllr Arnie Africa explained.

In addition, outdoor advertising and signs should not compromise the functioning and safety of traffic and/or pedestrians. Neither should it affect the character of a town by way of appearance, size or illumination. Illegal signage on fences and dustbins can also have a negative impact on the environment as a whole. 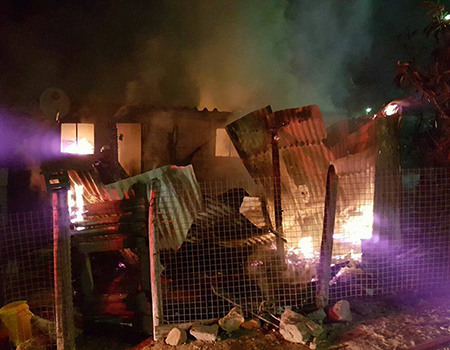 No less than six back yard dwellings and one house were destroyed in a fire in the early hours of the morning (Friday, 19 May) at Poppedorp, an informal settlement in Kleinmond.

“The chilly winter nights are fast approaching and we ask that people please be careful when working with flammable objects and not to leave any open flames unattended,” requested Fire Chief, Lester Smith.

Any emergency and/or distress call regarding a fire Incident or accidents can be reported to the Municipality’s 24-hour EMERGENCY ONLY number on 028 312 2400.

A botched attempt to steal electricity cables left Meer-en-Bosch, Flamingo Bay and Sandown Bay residents in the dark on Tuesday evening, 16 May and most part of Wednesday, 17 May.

The Municipality's Electricity Department worked tirelessly to re-instate the power after the issue was logged.
Vandalism of electrical infrastructure and cables theft, including meter tampering, bypassing and illegal connections, have a serious impact on the municipality’s budget for service delivery – particularly the electrification of areas that do not have access to it.

“It is money thrown down the drain - instead of taking the services to informal settlements where it is needed the most, and improving on the current electrical infrastructure, the municipality spends huge amounts of money and man-hours on overtime attempting to replace stolen cables across the Overstrand,” explained Stephen Müller, Director of Infrastructure and Planning.