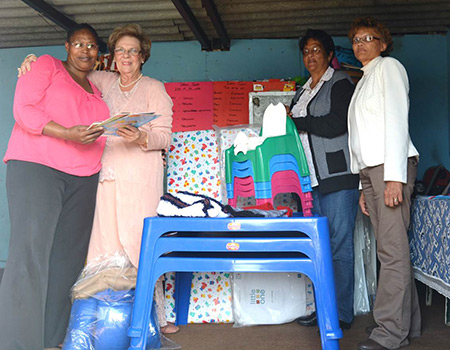 Looking on are Cllrs Moira Opperman (second right) and Mercia Andrews (first right). “I am so happy. This will really help us to provide a better service and improve the facility.

The children especially will benefit the most from these amazing goods,” stated an emotional Ndude, who holds certificates in Level 4 and Level 5 Early Childhood Development (ECD) training obtained through Boland Collage. 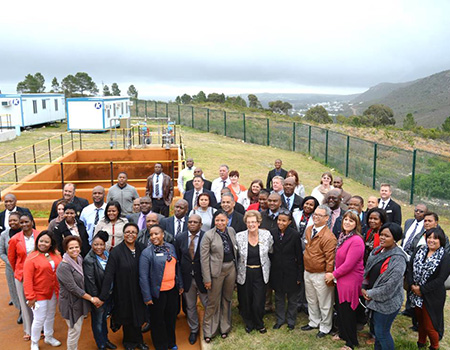 Thursday, 21 April 2016 – “We tried our best to arrange good weather and get the whales to bid you a hearty Overstrand welcome. However, despite our best efforts, it seems our order got caught up with Supply Chain Management. As public servants though, many of you can appreciate how cumbersome this process can be,” quipped Overstrand Municipal Manager Coenie Groenewald at a recent presentation to the South African National Defence College (SANDC).

The gathering, held at the elegant Whale Coast Hotel in the beautiful coastal town of Hermanus, forms part of the SANDC’s year-long study programme spread over six academic modules and a number of educational tours encompassing a broad range of national security matters. The course, accredited by the University of Stellenbosch and presented in collaboration with the SA Military Academy, saw the delegation paying a visit to the Overstrand Municipality on Thursday, 21 April 2016, as part of its national tour. 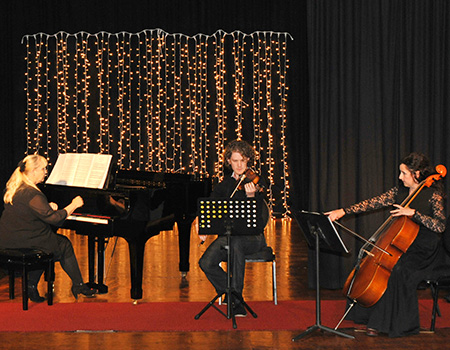 At the Annual Night of Excellence, recognition is given to achievers who make a difference in the Overstrand, by awarding the Mayoral Trophy for Environmental Conservation, the Woman/Women of the Year Award and the Award for Achievers of Excellence.

This year the Mayor will present the awards on 23 August 2016. Nominations are awaited and must be handed in on or before Friday, 29 July 2016.

Nominations for the prestigious Mayoral Trophy for Environmental Conservation can be submitted to Liezl de Villiers at This email address is being protected from spambots. You need JavaScript enabled to view it..

Nominations of Overstrand women who have made a difference in their area and should be considered for a Woman of the Year Award can be submitted to Elize van Zyl at This email address is being protected from spambots. You need JavaScript enabled to view it..

Achievers of excellence in communities can also be identified by councillors. Well motivated nominations can be handed to any councillor or be sent to Elize van Zyl at This email address is being protected from spambots. You need JavaScript enabled to view it.. 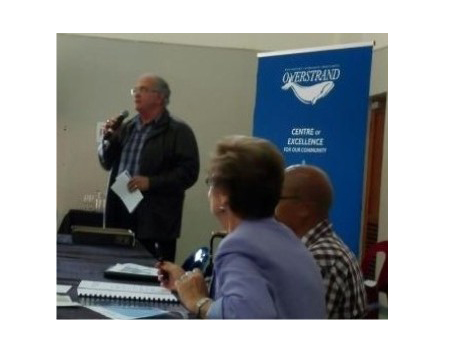 Overstrand Municipality will present its proposed budget and draft IDP for review by the public at a number of meetings during the month of April 2016. The budget will be presented in a simplified manner to ensure that community members are aware of developments in their area and will be given the opportunity to provide input.

The 2016/17 draft budget and draft Integrated Development Plan (IDP review) for Overstrand Municipality seeks to continue with a legacy of providing improved service delivery to better the lives of all communities in the Overstrand. The affordability of tariff increases are of great importance to the municipality and the level of services versus the associated cost is a constant consideration.

Therefore, the Overstrand Municipality is inviting everyone to get involved and give their input into the 2016/2017 Municipal Draft Budget and IDP review. 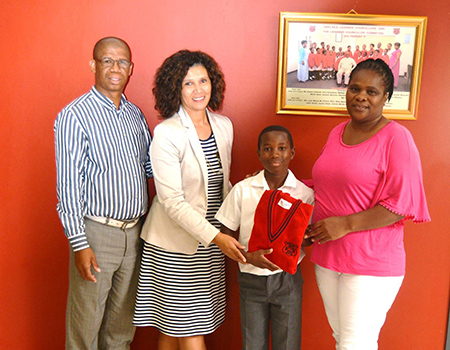 Akhule belongs to the Overstrand Whale Boxing Club (OWBC), through which founder and Chairperson Mzi Damesi provides sporting opportunities such as boxing to the townships in the area.

It was then that the Mayor was filled in on the silver medal that the young boxing dynamo had achieved at a national boxing competition held in Gauteng in June 2015. Moreover, Akhule was also selected to be part of the national athletic squad set to compete at the 2022 Commonwealth Games in Durban.

Heartened by the plucky youngster’s story, the Mayor endeavoured to assist by issuing an appeal to the community and local business to aid him and the Club.

Botha-Guthrie also made the commitment to donate a new school jersey to Akhule since the one he wore at the time was rather threadbare and too small.

On receiving the jersey from Resandt, the grateful grade-five learner said, “I will wear this jersey with pride as the Mayor especially got it for me. With winter coming, I know I will be warm and not have to worry about the cold seeping in through the holes like it did with my old one.”